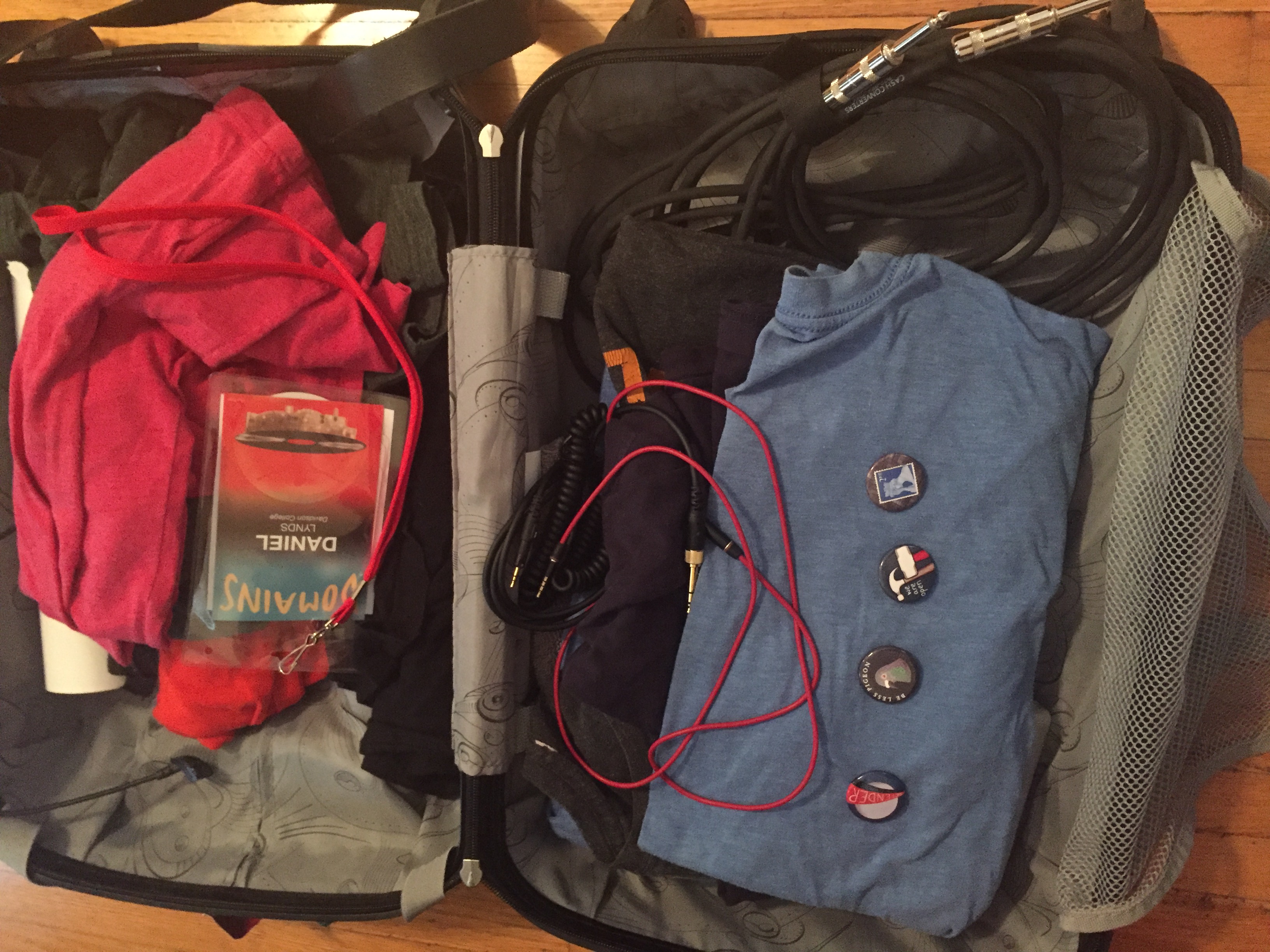 I left Oklahoma bursting. Still am really. After two and a half days with people/ideas/purplepenguins at #Domains17, I was full of all of the stories. On the evening before the conference began we were dropped at 21c Museum Hotel in Oklahoma City which is a converted Ford model T plant. We had dinner there that night and then moseyed over to Flashback Retro Pub for some coin op madness. On top of pulling a draw with Jim Groom on two heated Track and Field matches, I had some great conversations with friends old and new and some for the very first time in the flesh (ITF). Everyone was abuzz with the two days to come and we talked at length about many Domainy things – art, games, music, writing, architecture, research, food, and locations. It left me feeling lifted.

On the first morning there was a “Domains Fair” which was an eclectic mix of Domain of One’s Own (#DoOO) based initiatives at a variety of institutions. Said fair was DJed via #ds106radio and felt at once intense and cozy. If I had but one takeaway here it is the work Laura Taub (and others) are doing with #DomainsResist at Muhlenberg College. It is the most important work of archiving protest. Although I didn’t get to see the session on the second day based around this, the twitter feed afforded me to see: “Take back the archive. Take back the web. Tell untold stories. Make [campus] history.” These ideas really pushed me to think about how we should try and frame every project we work on.

To this point I am often asked: What is a domain? OR What is this Domains thing I keep hearing about? Depending on context and who is asking, I explain the history of DoOO and touch on Domain Literacy a bit, but I’ve never had a “go to” structure/response. Using the Cynefin framework to help talk through this, we could say Domains fall into all of the areas: Simple because it is “just” a website, Complicated as it allows you to structure multiple areas for sharing and exploration, Complex for there are an endless number of ways that it can be used as part of your digital identity, and chaotic – I’m not exactly sure how to describe this bit. My thoughts on Domains veer into many directions depending on the context, but Martha Burtis’ keynote helped me more clearly articulate an approach and structure with which to look at future projects. Although there were several notable takeaways, I think the main one was her breakdown of the four key components to DoOO: Naming, Building, Breaking, and Knowing. In this order, one could perfectly (and problematically at the same time) map out the cynefin framework as well – Name (simple/best practice-ish), Build (complicated decisions around apps and direction), Break (adding subdomains, using aggregators, reaching audiences), and finally Knowing (our ever chaotic realm of trying to prove we KNOW something and/or what knowing actually means). Refusing to get all philosophical at the moment, I think these four steps align almost perfectly with how I build meaning in my life in general. But that’s a whole other post.

Weaving in and out of conversations at Domains17 was the idea of metaphor. At the beginning of her keynote, Martha Burtis asked us to write down a word or two that we thought described all of the images she used as springboards to ideas. My interpretations of this was to name and then try to attribute pseudo abstract ideas to these pictures. After this, she asked us to think of a physical space that we thought represented the internet using #concreteweb. My initial response I now find lacking. In retrospect I would change my answer to my suitcase. It is a symbol for my wanderlust and potentially how I find the web to be a constantly evolving learning space. As a concrete space it can contain, and has, so many different things and continually gathers traces of its journeys. When I travel/experience/return from trips, I usually leave it open, in plain sight, long enough to fool myself into thinking I have processed many of the elements of that trip. Often times there are new items in it from the trip(s); postcards, stickers, books, shirts, a tie or two. As of this writing my suitcase is still on the floor of my bedroom unpacked. It remains the perfect analogy for my thoughts on Domains17 – open and unfinished.

As a parting thought I would say that Domains is like a lifestyle that one needs to improve no matter how good they think theirs is. Sure they are problematic and messy, but they can at least be an attempt to do share good things with the world. And while that could/should be criticized from many angles, we need to be diligent in our attempts to harness what is positive and critically build on them. There are issues like this in pretty much all edtech conferences, but if Domains is meant to be the “ascendant technology” it aspires to be, we all need to do more to bring diverse voices into the fray, whom domains will potentially best serve and amplify. Although there were many female presenters and attendees, we do have a lot of work to do after #Domains17. We must aspire to write stories that include more students, more POC, and more diversity in general.

Now I am off to read all the reflections others have written about Domains17 and there are many. Over the past month I have intentionally not read anyone else’s reflections so that my piece would remain uninfluenced.

If you’ve read other Domains17 posts which ones are your favourites and why? How can Domains18 intentionally include more diverse narratives?

PS: I must also mention how awesome @brumface‘s approach to organizing dinner. SRLSY! If you ever organize a conference, take her advice!