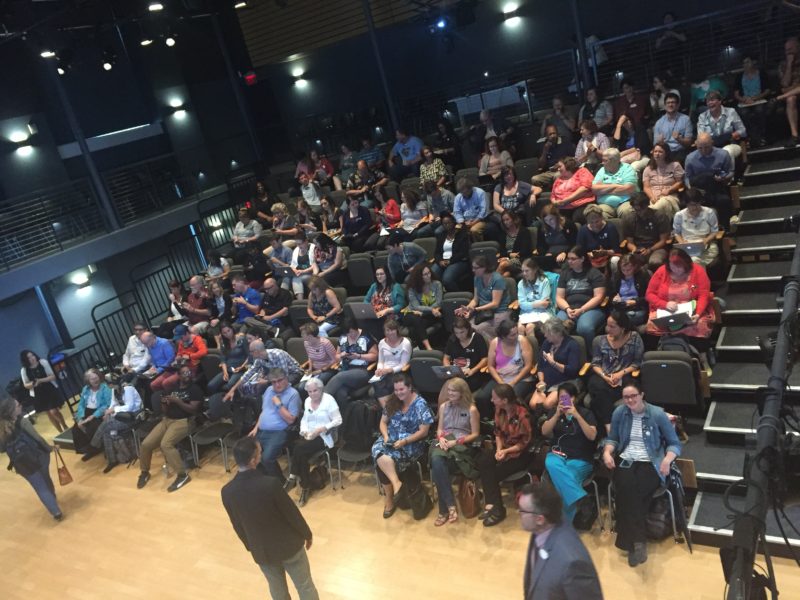 I’m finally here. For years I have been part of Digital Pedagogy Lab Institute (DPLI) community – perhaps not a major contributor to the larger body of work, but an enthusiastic collaborator and instigator at turns. Two years ago I yearned to be at the first DPLI in Madison – I watched from afar as so very many of the people whose work I found challenging and lovely at the same time shared the same physical space. Last year I was extremely lucky to be part of DigPedPei and even delivered a workshop on dataviz. But this year I am in the heart of it. The University of Mary Washington  – the birthplace of #DoOO and the current working space of so many totally awesome people. When I met Jim Groom for the first time In The Flesh (ITF) he espoused on his history at UMW (a lot of which I had mostly lurked on from teh internetz) and many of the cool projects and people he had (and does) work with. It was all so very far off though. A land I never thought I would one day visit. But here I am now.
Today began with hugs and hellos to bodies I have and/or have not touched somehow before. We should have a rule right? If you share a bunch of laughs and love and thoughts on teh internetz and then you meet someone for the first time → hug! You don’t have to hug forever and deeply, but even a shoulder to shoulder tap. Unless people really know you’re not a hugger, or it is not appropriate for you to hug for whatever reasons, in which case you get a warm and greeting pair of hands. Such a great feeling to forego the normal handshake. My day started like this – with hugs and an awesome pair of welcoming hands.

And then it began – with a kind and welcoming message from @slamteacher that spawned these tweets:

Listening to @slamteacher welcome us quietly to #DigPed, thinking about these painful times. How do we make a pedagogy of freedom?

“Education is the practice of freedom.” Yes. I am home here. #digped

Sean Michael Morris’ work has consistently been a beacon for me as an instructional designer and even more just as a human. His work has constantly been a voice for the empathy we SHOULD all have. His voice is aspirational and his sentiments and praxis inspirational. After Sean’s introduction, we moved onto an ice breaker activity led by Jesse Stommel. It was so much fun. Our task: get into pairs and, using a bunch of lego pieces on our tables, construct the avatar of your partner. Here are some of the results:

Got 2 talk 2 @slayams She made me my awesome avatar.These are running pants #DigPed Lots of bearded heads in the mix. pic.twitter.com/7DQPSggrCa

After going through the exercises and thinking some, there are several pedagogical implementations with this create your own avatar exercise. You could use it as an icebreaker exercise at the beginning of a class to get students to engage in a variety of narrative discourses. For me, my avatar was a reflection of myself in a variety of ways and right after this, someone suggested how interesting it would be to use the avatars as a way of trading and swapping pieces with others. So many possibilities.

After this we went into our tracks and I am soooo happy to be in the Data Literacies track. We started out with an ice breaker exercise which was hosted on GitHub. It was the basic “find someone who” exercise, but with the twist at the end of the exercise we reported back on others. This was an interesting way of introducing each other instead of introducing yourself. It also got to the core of what the data literacies track is about: how data can be reported, built on, manipulated, and shared. Kris Shaffer is openly sharing all of our schedule so have a look and do all the stuff you want to.

My last takeaway from the track is we were asked to read an article by Danah Boyd. As Kris had sent out the schedule in advance, I thought I would be a good student and read in advance. Opening the article in Chrome, I had hypothes.is open and I started going through the article. At one point I noticed this great quote was annotated so I opened up the annotations. What I saw was kind of embarrassing and cool at the same time – I had made a couple notes on the article back in January. So, it is either that my research is so deep that I can’t remember all the things I read, or I am old and my memory sucks. Or something else. It is interesting that this data sat there and then I re-encountered my own data in the data track.

Not sure how the rest of the week will go, but I do know that I am here, with some of my people, in so very many excited ways.